Since Colonel Gaddafi was overthrown in 2011 Libya has been subject to instability and lawlessness. But what is happening now and why is Libya lawless now?

Who is in control of Libya?

This is the issue. At the moment nobody is in control of Libya. Approximately 1700 armed groups, with a variety of different goals, are in combat in Libya at the moment. These groups are mostly looking for money and power, but at the moment the country is in total chaos with all the conflict between these groups.

Were these groups on the same side?

During Gaddafi’s era the groups were united by their hatred of Gaddafi, however that was it. The groups all have slightly differing interests, and no single group ever led the way in opposing Gaddafi. The groups have little knowledge of how politics works and how the rule of law operates, which has led to further political troubles since 2011. This is demonstrated by the fact that there has been 5 different governments in Libya in the past 4 years. 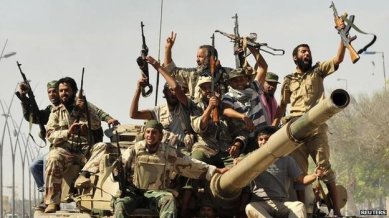 Is any help outside Libya provided?

There is some help provided, but this is minimal. The US government said they would help Libya retrieve any stolen weapons from the Gaddafi era, but not much more than that. Despite this, many of the stolen weapons have not been recovered and most of them have ended up in the hands of these armed groups throughout the country today.

Other African countries are fearful over where these stolen weapons will end up. Many people believe that the stolen weapons could deepen the instability in countries such as Mali and Niger, as well as in Sinai, Gaza and even Syria.

There have been a number of attacks on foreigners, including a number of attacks on diplomats (an official representing a country abroad). This includes the killing of the US Ambassador Christopher Stevens in Benghazi. Furthermore, western oil firms were seized by many groups causing a decline in the global oil market.

Which group is the most dangerous?

Ansar al-Sharia is potentially the most dangerous armed group in Libya, as it is blamed for the death of US ambassador Christopher Stevens and for forming relations with a number of Islamist groups. Colonel Khalifa Haftar also has a powerful militia (armed group), and has a goal of defeating Ansar al-Sharia.

The people of Libya

The troubles in Libya lead many to live in fear, and there is little evidence that change will happen. The government is being controlled by these armed groups, but it is hoped (by the government) that some groups will combine to form a sort of national army for the country to stop the continuance of instability and lawlessness.

What do you think is the solution? How can the government stop these armed forces?

Public outcry has led to the Kenyan government to cut MP salaries by $45,000 to $75,000 (approximately 40%). Protesters called the Kenyan MPs ‘MPigs’ forcing this decision despite a previous decision in May where MPs saw their salary rise to $120,000.

However, MPs will receive a $58,000 car allowance for agreeing with the cut, as well as a large pension, an armed guard, a diplomatic passport and access to airport VIP lounges. The MPs believe that they deserve the high salaries, often providing financial help to their constituents. Although many would agree the MPs are hard working the public outrage stemmed from the fact that they were receiving well over the national average income of $1,800 per year.

Should Kenyan MPs have their salary cut? If so what should be done with the money?

Today Iceland held a vote in their elections where a defeat is expected for the current coalition government, who first made it into power after economic difficulties in the country. The two parties who were partly blamed for the economic difficulties are expected to form a coalition to replace the retiring prime minister, Johanna Sigurdardottir. The two centre-right parties are eurosceptic; this could prevent the government’s efforts to secure EU membership.

The Progressive Party, normally thought of as Iceland’s third party, has grown in popularity as a result of its opposition to the government’s to use the people’s money to repay British people/banks for money lost in their banking collapse. Their leader, Sigmundur David Gunnlaugsson, hopes to get approximately 20% of their debt waived by foreign company’s whom they own money too.

The Independence Party, their conservative party, fell from power in 2009 after being the key party since after World War 2. The main reason for this was because much of the blame of the economic crises was put on the party and their leader, Geir Haarde, was put on trial – but he was only found guilty of minor offence. Currently, their leader, Bjarni Benediktsson, hopes for increased economic growth in the country by encouraging investment and reducing taxes.

The current coalition, between the Social Democratic Alliance and the Left-Green Movement, are low on opinion polls and unlikely to gain re-election. Bright Future, a pro-European party, and the Pirate Party, a pro-digital rights party, are also both low on opinion polls.

Why Is The Current Government Not Popular?

The simple answer is because they are blamed for the economic collapse 2008-2009. Since then the country has experienced some economic growth and unemployment has dipped below 5%. Unfortunately, Iceland still has high debts and owes a lot of money to other countries and companies. The governing coalition made matters worse by declaring that they would pay of these debts using the citizen’s money.

The residents of Iceland wanted to join the EU after the economic crises because it is seen as a protection for the country from future economic difficulties. Although the government did start some negotiations they have been slow and nothing much has come from it.

Does al-Shabab control much of Somalia?

Who is the leader of al-Shabab?

Attacks by al-Shabab, other than in Somalia

Somalia is pretty much a failed state. They have not had an effective government for about 20 years and have been subject to constant war. As a result, al-Shabab easily won support among Somalia’s promising security – something the citizens welcomed!

Hungary has approved a series of amendments to their constitution that had been deemed unconstitutional in past rulings. As a result, this could mean increased power for the state, increased power for the conservative Fidesz party and remove/weaken a number of checks and balances. The Prime Minister of the country,  Viktor Orban has declared that the amendments are necessary if the country is to continue moving away from Hungary’s legacy of communism.

What are the amendments?

One amendment is to weaken the Constitutional Court meaning they will not have the power to remove laws already contained in the constitution. Another amendment, which other critics say weakens the Constitutional Court, is to lower the retirement age of judges in the country. Election campaigning has been restricted to the state-owned media, which has been argued to reduce freedom of expression in Hungary. A number of civil liberties (citizen freedoms) have been restricted and an anti-gay law has been created. 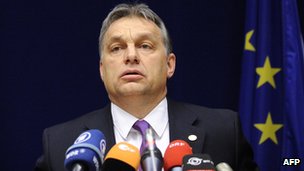 How was the government allowed to implement these amendments?

The wining conservative coalition (Orban’s Fidesz party and the Christian Democratic People’s Party) gave the government a two-third majority in their parliament, giving them substantial power to pass these changes with little opposition.

Who has opposed the amendments?

The United States government and a number of European Institutions have shown their concern over the amendments stating that it will undermine the democracy of the country. Furthermore, human rights organisations (e.g. Amnesty International) have also shown opposition

In the country, the Socialist Party refused to vote and thousands of protesters turned out in the capital, Budapest.

How has the government reacted to opposition of the amendments?

Orban stated that he was “fully committed” to European standards, but he has no intention to not go ahead with the changes. His deputy prime minister, Gergely Gulyas, said that “It’s natural for the governing majority to make use of the authority it received in democratic elections”.

What are your views on the amendments? Has Hungary’s government overstepped it’s power? What if this was your government?

For our American readers, a lot of this, if not all of this, will probably be something you have known since your childhood. But, I feel that it is necessary that we write a blog on the fascinating constitution: how it was formed, what it involved and how different people view it!

How and why was the Constitution formed?

In 1776, thirteen colonies declared their independence from Great Britain by signing the Declaration of Independence, making them ‘free and independent’ states. Consequently, this lead to the War of Independence between the former colonies and Britain from 1776-1783. The colonies had to pay tax to Britain, even though they had no representation in the British Parliament, so wanted to form their own system of government. In 1781, the newly independent colonies established a confederacy through the Articles of Confederation – a confederal government has a lot of power given to the states but little to the national government. However, this confederacy almost turned their victory in gaining independence into a defeat because it proved to be a disaster as their was little power for the national government, thus they failed to make a nation. In 1787, a group of people (now collectively known as the Founding Fathers) agreed to meet up at the Philadelphia convention to amend the Articles of Confederation. In the end, they scrapped the Articles of Confederation and created a new constitution with a number of compromises as to the allocation of powers.

What were the compromises?

How liberals view the constitution

Liberals (such as the Democrats) would argue that the constitution creates a lot of gridlock (difficult to pass laws) and little accountability. Liberals also believe the Bill of Rights (defines citizen’s rights) is very important, but the system allows for the erosion of civil liberties during times of emergency. Finally, to a liberal, the courts have shown themselves slow and unwilling to intervene on a number of issues – especially social issues such as guns, abortion and gay rights.

How conservatives view the constitution 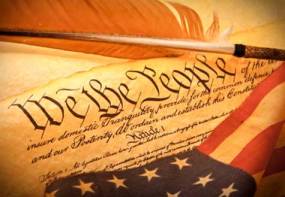 From a non-partisan view

The American constitution is the longest serving constitution in the world and the fact that compromises were made from the left and right meant that that there should be a good balance between the federal government and the state governments. Also, the difficulty of amending the constitution means that it requires broad based support for changes to be made to it.