Digestible Politics is back with daily posts helping you understand the world around you in a digestible manner!

Today, we shall be talking about what is happening in Thailand and the political crises currently happening…

The court in Thailand decided to get rid of their Prime Minister (Yingluck Shinawatra) because it was found she had illegally repositioned the national security chief of Thailand so he would have a different role in government. A further 9 members of the Thai government were told to resign.

Many people are angry about what has happened, believing the court is biased in favour of the opposition. 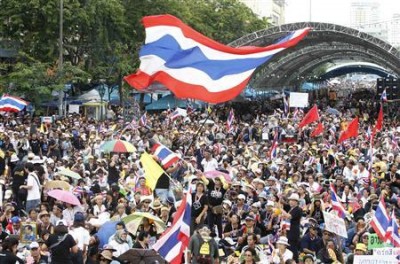 This political nuisance is nothing new in the country and many protesters have been protesting throughout the Prime Minister’s time in office, by occupying buildings and disrupting elections. So far, approximately 30 people have died during the protests.

Who is the leader of Thailand now?

Those ministers in cabinet who remain are currently leading the country with a caretaker Prime Minister (Niwatthamrong Boonsongphaisan) – Digestible Politics loves this name!

After disruption at a previous election earlier in the year, a new election is being held in July. However, there are fears that there will be even more protests to come in these elections.

A controversial amnesty bill (an amnesty is where you give a pardon to someone) was passed by the government, which could potentially lead to Thaksin Shinawatra (a former leader and also Yingluck’s sister) returning to politics without ever setting foot in jail.

Many thousands of people have showed their opposition to the bill, which was eventually dropped, but anti-government protests remain.

What are your thoughts on the protests in Thailand? Should they have ousted their Prime Minister?