The Greek parliament is holding a vote today on a proposal which could lead to the unemployment of 15,000 state employees. The reason for the proposals is to help the country to reduce costs and receive more bailout money, but there have been a series of protests in opposition to the job cuts from trade unions (groups representing those who may lose their job). Adedy, the civil service trade confederation, and the private sector GSEE union called a demonstration outside parliament late on Sunday afternoon against “those politicians who are dismantling the public service and destroying the welfare state”. 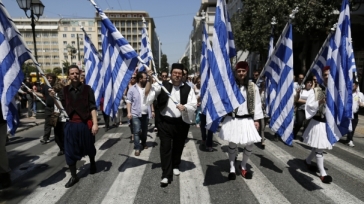 If the law passes it would undermine the constitutional guarantee that the civil servants’ jobs would be for life. Although the sector has been very large since the 1980s it is argued that the dismissal of the workers would be against their constitutional rights. Those who have broken rules will be the first to be dismissed, but a lot of other workers are to be replaced by younger employees.

It is estimated that if the law goes ahead unemployment will rise further than the 27% it is currently at. The proposals are predicted to pass with a fairly comfortable conservative majority supporting Prime Minister Antonis Samaras.

3 comments on “Job Cuts In Greece”